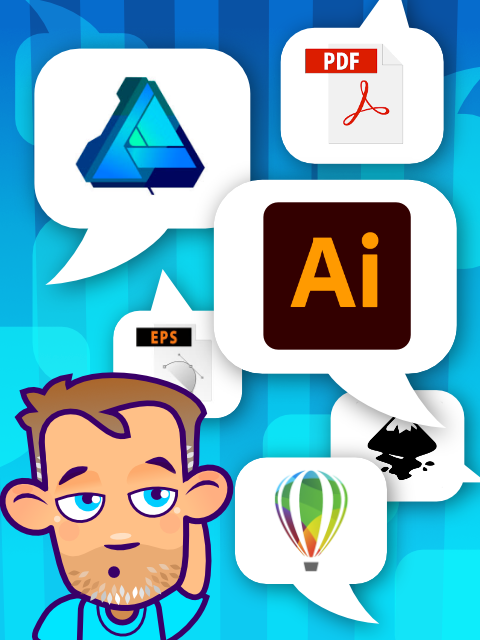 A “quick attempt” at explaining file formats using languages as a metaphor
or
why won’t my cool, sparkly, brilliant design export to SVG?

Let’s pick a tool. Affinity Designer is one of the vector design tools I enjoy using. It’s modern and user-friendly – let’s say it uses a modern language for this piece let’s call it French. There are words for all the things we encounter daily. It’s a beautiful language and it works!

Now, we look at Adobe illustrator. It also can be seen as a modern language but a different one – let’s say, German. It’s somewhat related and there are words for all of today’s elements in it as well. Plus they added a few more, being German and all. Yet, a translator is required to communicate between the two, and still, things get lost in translation. Little nuances, the flow and, sometimes [depending on the translator] even the whole meaning. Your pressing export in Affinity designer is similar to employing a translator.

Then there is CorelDraw – another player in the market but doing similar things. For this example let’s associate Japanese with it – more technical and with a unique approach. Its language follows different rules and even has a totally different way of writing. There is no direct translator available. In order to make yourself understood you have to go through a ‘common grounds language’.

This is where PDF kicks in. It’s the English speaker’s version of a file format. I can get the message across on a lot of platforms from documents to art and even 3D models are integrated. Yet, it’s missing some of the unique elements of Italian, German, or Japanese. Finer details get lost in translation. Those details are e.g. the blur filter, the vector brushes, or the gradient FX. PDF will display them, but they are no longer editable the way they were in Affinity.

Then there is EPS and SVG, they speak neither of those three languages but something closer to ancient Greek and Latin. A lot of words are missing in the sets. Trying to describe a computer or a V8 engine in Latin will be hard. You might have to use a lot of signs and images. These signs translate to bitmap images in SVG and EPS. They might get the idea across but they can no longer be written down or exchanged for other words.
You would need a more simplistic approach that is based on the words of the language.

Inkscape [a free vector tool with a good set of tools] could be seen as Italian. They took the limited word set of Latin and added to it. It’s still SVG but no longer a pure form of the file format. An Italian would understand Latin quite well, yet an ancient Roman would look at the Italian explaining modern civilization and not understand as a lot of words wouldn’t make sense to him. Inkscape’s SVG files do that to most import filters or browsers. The core might be translated but the flowery decoration will be lost.

In essence, file formats are very different in the way they store data. Knowing what they can do and what they can’t do helps a lot in the design process. No matter if it’s trying to create that cool design for a laser cut in e.g. EPS [as the machine’s software requires that format], doing the T-Shirt print that’s asking for an SVG file, or collaborating with users of other tools and finding the common ground.

Don’t try and describe a V8 supercar engine in ancient Greek. It just won’t work that well. Just like EPS won’t get the transparent gradient you put on the clipping mask with the cool sparkle effect you added to that beveled logo.
chris2021-02-20T07:53:28+10:00February 20th, 2021|Adobe Illustrator, Affinity Designer, basics, EN, Inkscape, News|0 Comments