Animation – setting up a character in spine

Animation – setting up a character in spine

This video is an introduction to using spine to get started with game art animation. The video is aimed at beginners. Users familiar with the software or cutout animation, in general, might find it a little slow. I am using spine from esoteric software for this video (currently in version 3.5.46). Generally, I prefer to cover free tools on my blog. Nevertheless, I am making an exception as this tool is a great help for game art creation. Spine is available in the essential version (without some of the more advanced features like IK and mesh deformation) for $69.

I used the robot from the earlier ‘complete game art tutorial’ series and uploaded the art here. The archive includes the exported .png files, the Inkscape source file as .svg and .png and the current spine project (with the setup and two idle animations). 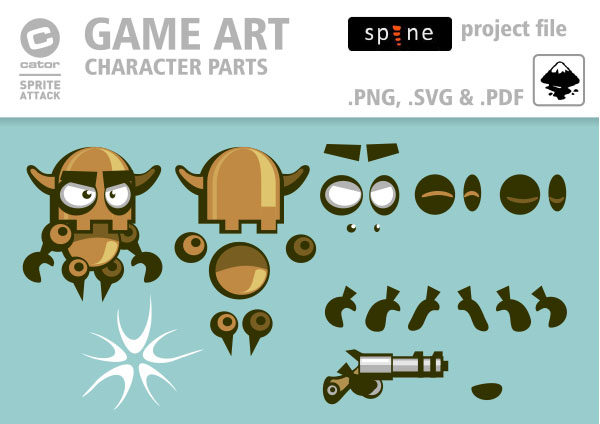 I just recorded the first video tutorial on cutout animation. Due to the complexity of the subject I will split it into 3 or 4 parts. The first one is about the basic setup of the character, creating the skeleton and assigning the art as well as a first animation.

The robot character seemed ideal for a starter as he has fewer joints. This makes it easier to set up and animate. There are neither the knee nor ankle joints. The hands and arms are combined to cut out the elbow joint. There is no hair or mouth to animate either. Adding those parts will result in a more dynamic character. It will also mean more time to set it up and animate it.

I hope you enjoyed the tutorial. The plan is to continue this series of video tutorials on character animation using spine. I might end up covering Spriter and DragonBones as well. In the end, it will boil down to spare time.