I have had a few request to do something isometric recently. Mostly, the requests are about characters and animation or more complex elements like buildings. As usual, I try to start a little easier to ease the learning curve. Let’s create a simple isometric grass block (how boring of me ;) ). That said, the next tutorial is already in the making. I find isometric art a lot of fun. Well, it’s a lot more fun now doing it in vectors, than it was back in the old days.  Making 16×16 pixel blocks look good was a different challenge. Especially when you only have a only handful of colours.

What is isometric art?

Now that’s a mouthful… and please… don’t ask me to explain it…. I just use it…  ;) Basically it’s an attempt to fake a three dimensional feel in 2D by rotating the ground 45 degrees and ignoring the perspective scaling. This means objects do not get smaller when they are further away.

Let’s get started with some basic steps into isometric projection. This is close to ‘true isometric’ but not quite there – but a lot easier to handle artwise.

Note:
With different game engines you might encounter slightly different proportions as far as the vertical scaling goes… but the process of creating the elements would be very similar. 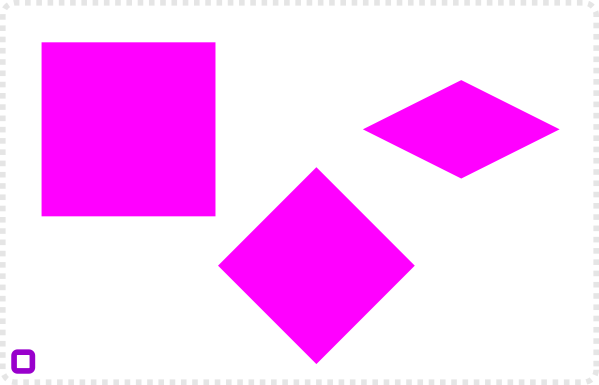 Let’s start with a square.

Rotate it by 45 degrees.

Scale the height to half it’s size.

Duplicate the shape and select both the nodes at the top and right. 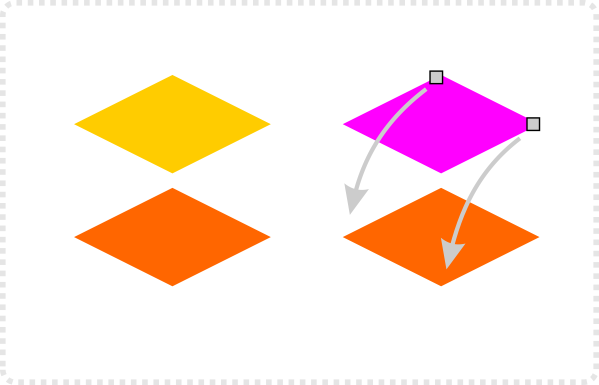 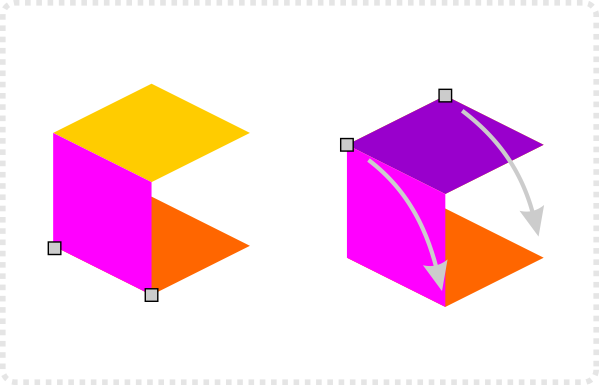 Move those two nodes to the left and down to connect to the bottom shape.

Duplicate the top shape again and select the left and top node this time.

Move these nodes down and right to connect to the right side of the bottom shape.

This creates the base cube. 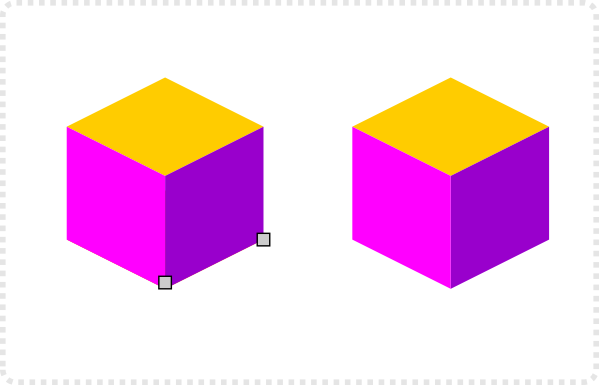 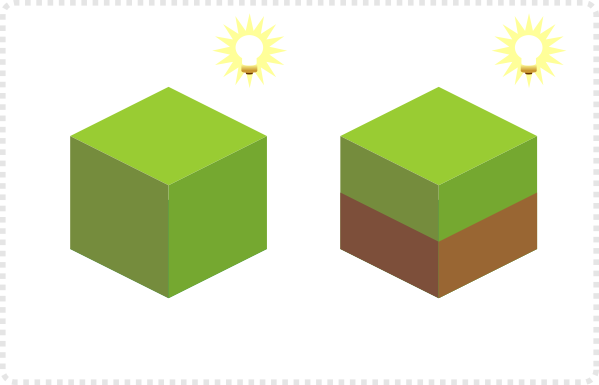 Let’s add some colour and determine the light’s direction.

I chose a light source in the top right. As a result, the top is lightest and the left side darkest.

Add some decor with a few deformed circles (keep the ½ scale in mind) and a few triangles with a colour gradient. 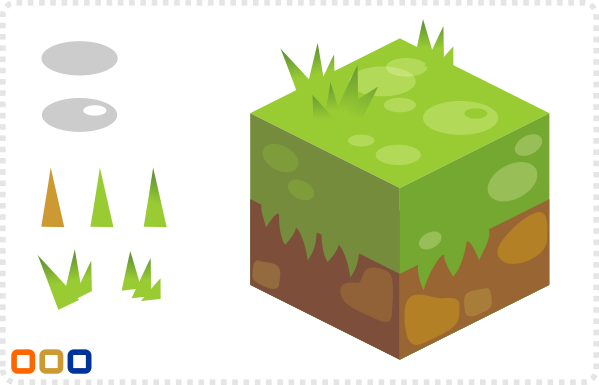 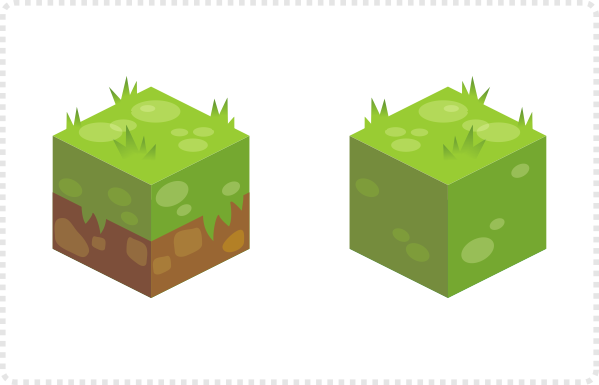 Create variations of the blocks to make it look less repetitive. Usually, it works fine by simply rearrange the decor shapes.

By creating more blocks (e.g. a pure grass block) will allow you to variate the terrain you can build with your tiles.

For my little scene I added a quick tree – with a couple of circles (keeping the 1/2 deformation ratio in mind)  and some simple rocks based on the same circles – and it’s already starting to look like something you would expect to see in a game.

Creating isometric tiles is a bit more time consuming. Things get deformed, skewed and squashed. Yet, it’s an appealing look and well worth it. You might find it easier creating elements in frontal view first. Afterwards, you skew and adjust them to fit the angle. E.g. rather than draw a door for a house in isometric view, create it with rectangles. Once done, skew the finished element to match the isometric setup.

A main problem you will encounter when creating whole scenarios in inkscape based on ‘isometric blocks’ is the depth sorting. It will only look right if the tiles are stacked properly. The tiles furthest away (top left corner of the screen) are on the bottom of the pile and the closest (front right corner) are on top of the other shapes.

Layering your scene can be quite helpful. E.g. make a layer with water tiles, then the ground tiles on top, the decoration on a layer above that.

I hope you enjoyed this quick post and it’s a start into the creation of isometric tile-sets. The next part of this tutorial will be props and buildings (and I will do characters and animations as well.).

Note:
Turning on the snapping in Inkscape makes aligning nodes in step 5 a lot easier.
Turn on the snapping View/ Snap (%) to align nodes precisely to others. In the snap button bar there is a button  to ‘snap nodes or handles’ (7th from the top) and by turning on the sub-function ‘snap to cusp nodes’ (10th from the top) allows you to snap nodes perfectly.
In case it’s still not as responsive as you would like go to the Inkscape Preferences (Shift+Ctrl+P) and change the weight for the snapping there.
Get the source art (svg file) of this tutorial for free!