After a bit of celebrating the 2 million mark, I am back with the next project the “Complete Game Art Project”. I hope you got the presents alright. According to the stats it was a success. Some work needed finishing. There were a few projects that would have stopped me from properly focussinh on this series of tutorials. Plus I needed little bit of time to think about the right approach and sequence of blog posts. Finally, it’s time to get started.

Let’s begin by defining the goals:

So… let’s start throwing around some ideas. One thing I learned from forgetting all those ‘great ideas’ in the past – they happen at the oddest moments. E.g. while I was diving the Great Barrier reef and seeing some weirder than weird critters. Some colour combinations there are totally unreal. For those moments it’s ideal to have a notebook and a pen readt. Preferably, even having the mobile phone (camera) with me at all times. Write things down that would be cool for your game – from the old guy with the funny walk and the cane he’s carrying but not using to the colours scheme you see while doing grocery shopping on a kid’s chewing gum packaging.
I don’t bother too much with archiving these things but rather throw them all into a ‘reference’ sub-folder in the project.

Another great way to get inspired is by playing games that you enjoy and instead of keeping an eye on the game’s objective look for the things that stand out, look cool, feel great and try and work out how they created them.
With visuals it usually helps when you search in Google images for screens of those games/ effects later to see them in still image. Save those right away, pin the, pocket them, bookmark them. It’s usually lot easier to find them on your hard drive than search the internet for that ‘image that got away’.

A lot of these ‘idea sparks’ will not make it into the game but might lead to something else that turns into a cool feature.

What started this project

For the Complete Game Art Project the initial spark was a cog I did for a user interface. The basic cog is easy enough to create. Yet, a few tips and tricks on how to speed the creation up would make a nice tutorial. 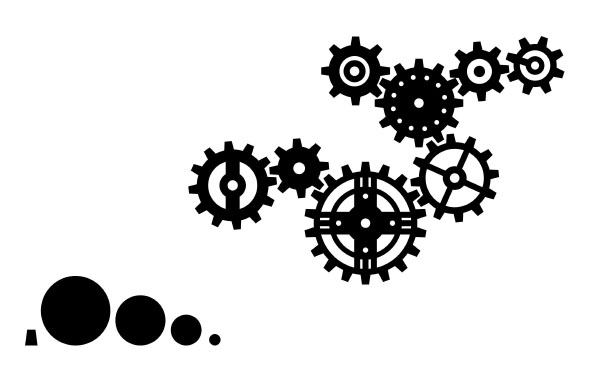 While working on some variations of cogs in different sizes and varying levels of detail the canvas got a bit of a ‘steampunk’ appearance. Those elements would make a nice background for a platform game. It would probably look great if the background would be filled with animated cogs.

I rearranged the cogs a little and put them in a separate layer. On top of it I created some boxes to represent the platforms to give me a quick idea of what it might look like. 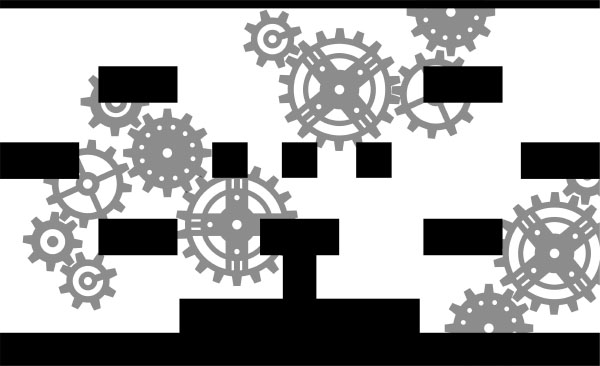 This defined two aspects – the look and feel: I am going for a steampunk atmosphere (using metal, brass and cast iron) and it’s going to be some sort of platform game.

Next up is the character

Note:
For me the design of the main character defines the whole look and feel more than any other element. You want it to be unique, recognizable and in most cases likeable, able to perform all tasks set by the game design (e.g. walk, run, jump, swing a sword, fire a gun, shoot a hook, etc.) and be scalable down the ingame size.

What kind of character would look cool on a background like this? I think most of us have seen enough steampunk illustrations to instantly recognize the style. The gentleman with top hat and a mechanical limb, a big furnace strapped to his back or a crazy contraption of a weapon in hand might come to mind. As much as I would like to do one of those, he poses two problems. One being the level of detail. It would make it hard to fit into just one tutorial. Secondly, his proportions would create problems with the level design. He would have to be tall – with the hat even adding more height. Usually game characters for platform games are on the square side for obvious reasons. In the old days you had a limited amount of square ‘sprites’ in (what now appears to be ridiculously small sizes of 8×8 or 16×16 pixels). You just get more level on the screen when you don’t have huge vertical space between platforms.

Note:
I do realize that there is a multitude of very successful games that pull it off perfectly.

The main character needs to be something a little more stout. He needs limbs to make animations interesting (and a bit more work). A flying teapot might be fun but not good tutorial material. He also needs to have big eyes – to show some facial expressions during the animations.
I recently added a robot to the BlockBuddies and I did enjoy creating him. There is also a cute robot in the game ‘The Adventures of Shuggy‘ I did the artwork for a few years back. He’s featured on a poster in my living room as I do have a soft spot for him.

Robots connect fine with the steampunk theme, which makes them a good choice for the main game character. The can be simplified enough to explain the creation process and yet do all the animations and game mechanics needed for a platform game.

This should conclude the initial ideas for the “Complete Game Art Project”. In the next post I will get started on a character design with some sketches and the initial creation in Inkscape.