BlockyBird – take some blocks, add a few more and then some more still

BlockyBird – take some blocks, add a few more and then some more still

Sometimes you have projects that are challenging in a unique and unexpected way that’s pushing the limits of what you do – and that’s a GOOD thing.

Last week I came across one of those when a good mate of mine at Utopian Games showed me his concept for a quick game to be made for iOS and Android.

He needed some art asap to flesh it out and it did look like a fun Saturday morning project.

Breaking down the art

The parrot he had made consisted purely of rectangles, plain and simple but with its own unique charm.
‘We should make the whole game look like this.’

I should have known right then that it wouldn’t be as simple as it looked. I have done a lot of pixel art games in the past but the thought of pixeling for retina displays was just not feasible – not for a quick weekend project.

So it would be ‘somewhat of a pixely look’ but with rotations of the rectangles and some added transparency.

The bird itself was the easy part. I did rebuild it in no time and animating a blocky parrot was not much different than any other vector shaped object. A bit of scaling, skewing and rotating and it did look like it somewhat of a wing-flapping flight.

… but making a whole game using just the rectangle tool was a different challenge. There are so many other nice tools to work with that make things like palm trees and vines for the jungle a lot easier and faster to create. What about the logo/ title and the text elements like ‘game over’ – I usually rely on a nice font for those.
No – it had to be rectangles all the way.

Starting with the background and a nice sunset gradient and adding some clouds and mountain shapes. 45-degree rotations even made the trees look somewhat like trees. The palms and ferns are a different story and ended up looking like this:

A few minor variations [scaling and rotation and some colour changes to make the objects lighter the further they are away] and it looked like an ‘odd’ jungle. 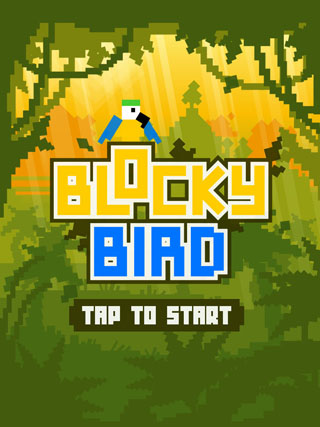 Some ingame objects later (mainly the snake – done once, animated and recoloured afterwards) the background looked like a proper game mock: 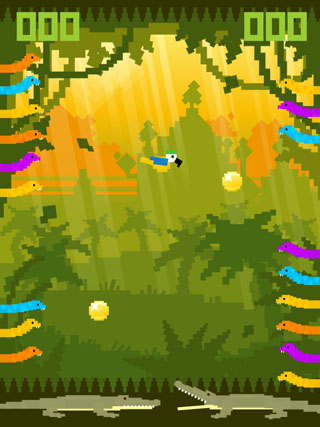 Staying true to the style I even redid the facebook, twitter and a game centre button to be added to the game over screen: 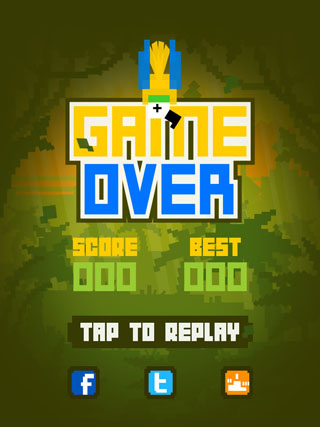 The larger texts for the title and the game over where created by changing the numbers I had created before (e.g. the A is the 8 minus the bottom horizontal line). As you might have guessed – at the end of the day I was seeing things in blocks, ended up dreaming of blocks and was more than happy to use the circle tool the next day. :)

We (Darren of Utopian Games, Ben – the musician – and myself) got it done though (in a little over a weekend) and it’s out for free:

I have to confess – I totally suck at this game. My ‘all-time high score’ of a meager 15 makes me realize that I am a game artist with a passion for games – but not a gamer. I hope you enjoy it!

[Note: Apple usually takes a little longer to approve the games for the iTunes store – I will add the link as soon as the game got approved]