Character design – some tips and tricks

Character design – some tips and tricks

I just had a friend send me his Inkscape character design and asking for my opinion.
Hadjoudj Mohamed did a good job for an initial design but there are a few easy to avoid beginner problems.

This tutorial is based on showing him how to improve, alter, and easily modify his character. A lot of the hints work with pretty much any character you create for an illustration or a game. 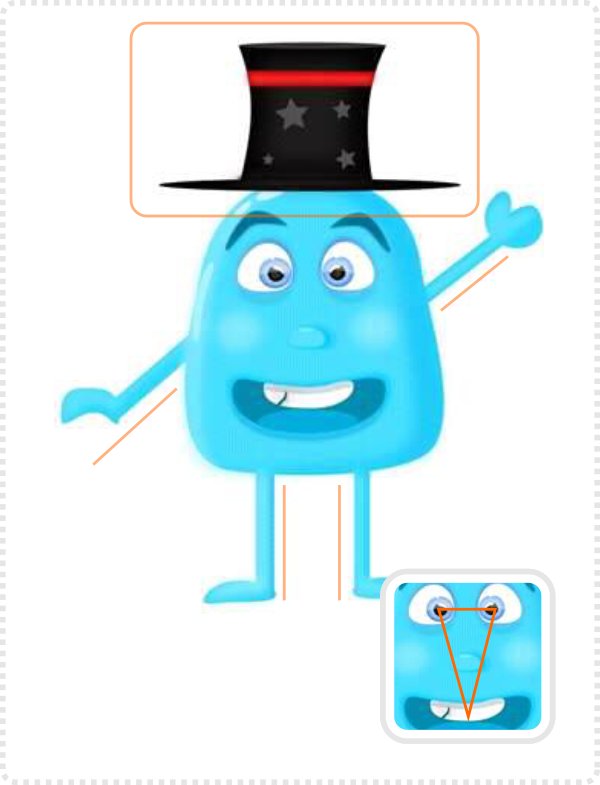 Let take a look at the character.

There is nice shading in the body and an overall consistent colour scheme.

The most striking elements are the hat, which looks too flat and the limbs, as they are very straight.

The proportions of the face make him look a little boring, due to being elongated with a lot of space between the eyes and the mouth.

Note:
Creating a triangle from both eyes to the center of the mouth. The smaller the height of the triangle the cuter the character appears.

Let’s simplify things and reduce them to silhouettes. Rather than lose yourself in details and shading, focus on the proportions and readability.

Ask yourself: Is your character creation recognizable in just black and white?

It‘s a lot easier to make changes when you just have the basic shapes to move around.

Scale, squeeze and bend them. Play with different setups before going into detail and working on shading and colouring.

I like to look at the shape of the design and not be distracted by all the detail, shading and eye candy. Can the pose hold up without the visual gloss? Is the spaceship design recognizable? Does that tree shape look interesting enough? The easiest way to group it all and colour it black. There is always the undo after you checked. :) 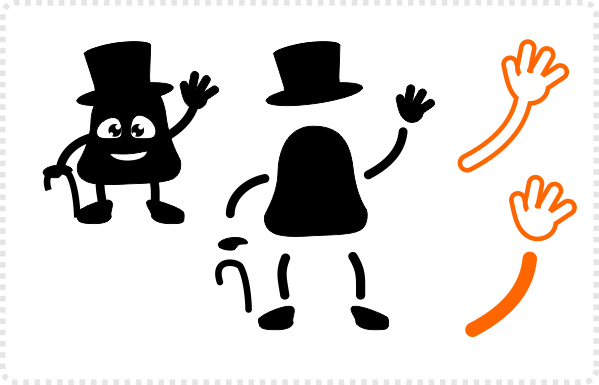 By using simple shapes you make it easier and faster on yourself.

For example, using strokes for limbs rather than create more rigid and harder to alter shape.
You can add the arm to the hand as a shape
or
you can make the arm just a curved line between two nodes.

Note:
If you want more pronounced legs and arms I would suggest breaking them apart at the joints in this early stage. 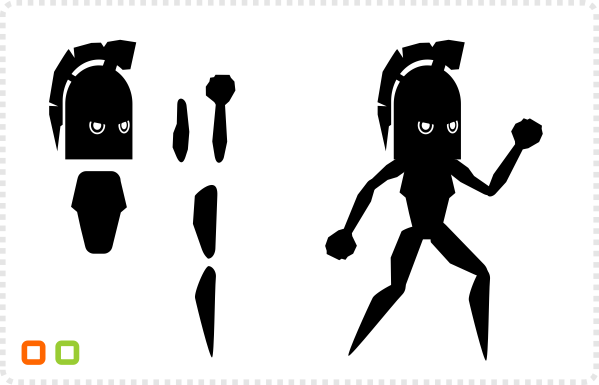 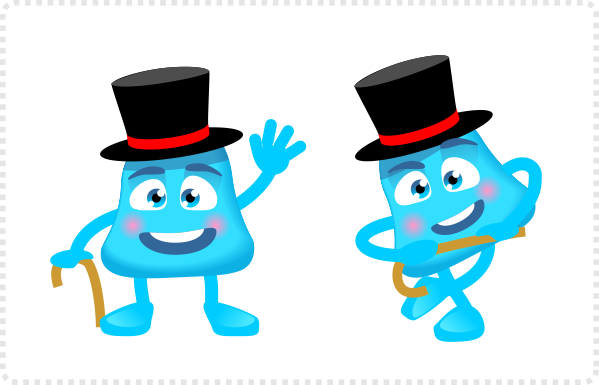 As the focus of this blog is on game art, animation is an essential part.

Keep the animation of your character in mind when you start designing.
This is the right time to plan the keyframes of the character. It will help you determine how to set up the parts.

Create extreme frames and get to know your character.
Is he still looking good when you move him out of the initial pose? 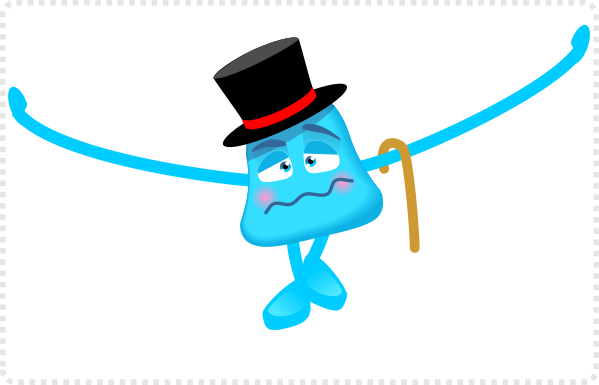 It’s tempting to do a character design in your favorite pose. Doing art for games most likely involves animations. Consequently, more than just one pose is needed. It’s helpful to try a few poses and possible angles before you go into too much detail. Will the character still look good in an extreme jump or run state? What would the getting killed look like? 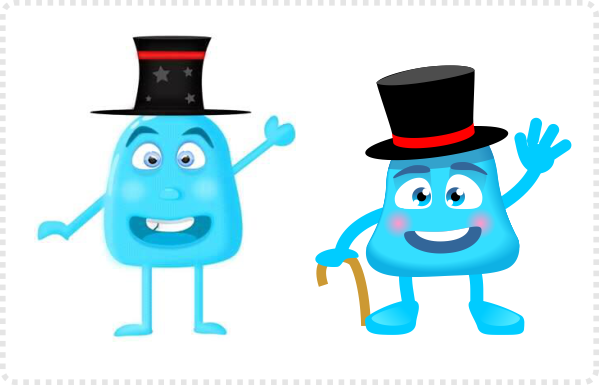 Once you are happy with your shape, pose, and proportions, it’s time to add some initial colours.

No need to go into too much detail when you are still finding your ideal colour scheme. Grouping elements with identical colours and adding shadows and highlights with transparency makes it quicker to try different colours.

Note:
A lot of the time things are easier than they look.

When I take the top hat apart, it reveals a simple oval that is the base for all other elements.
Duplicate the oval, combine the two via Path/ Union and remove the central nodes to create the cylinder.
Move two nodes up and out to make the top. 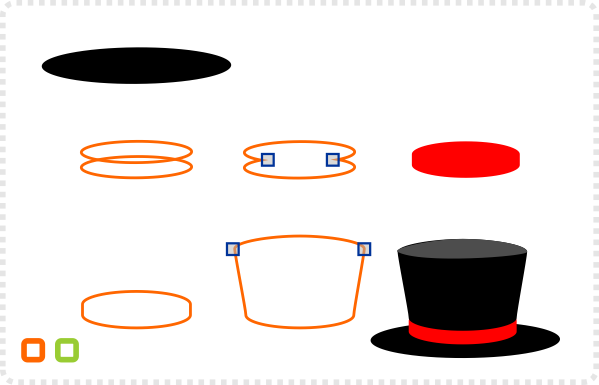 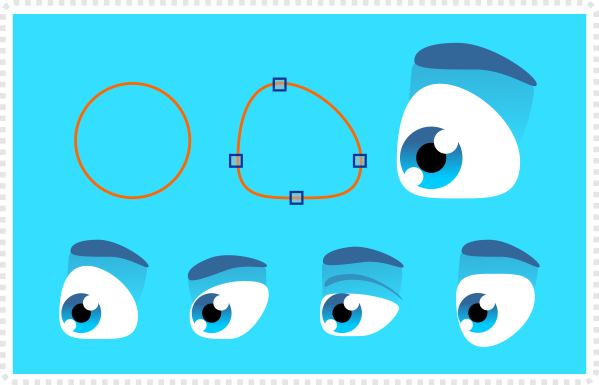 The fastest way to create eyes for me is always to start with a circle.
Deforming the initial eye shapes four nodes is quick and easy and gives a lot of different options.

A frequent mistake is the copy and mirror of the eyes without adjusting the lights in the eyes.

Selecting the iris and the lights and mirror it again to avoid the ‘mirrored look’. 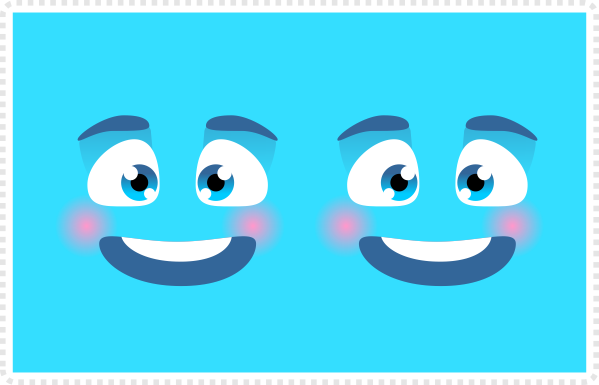 I hope you enjoyed this quick (and out of the planned order) tutorial. It’s unlike the usual posts. Nevertheless, you might take something from it for your own creations.